The void in VOIDBIT was created by Andy when he was meddling with things he shouldn't have. Once the void was released, he and his friend Pec tried to escape it, but accidentally trapped themselves in there as well.

They tried to run from it at first, but fell into a section of the void [WHITE VOID] and forgot where they were going, letting Pec get corrupted. Andy attempted to save them, and almost did with help from some other force looking out for him, but Pec managed to escape, fleeing further into the void. Now Andy travels the void looking for Pec, attempting to help/destroy any other void entity he finds.

The void is infinite, divided into millions of sections that contain a range of things, from a single colour, to worlds, to nothing at all. Each section can be completely different to each other, and while one void creature may thrive in one section, they might be destroyed in another. Hopping from section to section is tricky, as once you leave it's extremely unlikely you’ll find the same place again (unless you use the VOIDHub). The largest sections of the void are the colours, areas made of one colour and mostly empty except for the things that inhabit it.

When someone falls into the void, it's very unlikely they'll be able to get out. The void reacts to everyone differently, and depending on where you fall in also counts to how you get corrupted.

Andy is the only one able to decorrupt creatures, and can not get corrupted himself.

The Colour Voids are the largest and most inhabited areas of the Void. These voids are made of primarily one colour, and creatures that live in one of these voids can find themselves weakened/injured trying to go into another colour.

RED:
Dangerous, creatures that live here are often aggressive.Extremely hot, if you can not handle the heat you will not survive here for long.The sound of a gas stove and flies can be heard sometimes.Staying too long in this void can lead to quick anger and aggression.
ORANGE:
Lost things find themselves here often.This void gives a feeling of melancholy, like somethings always missing.Creatures here may not be aggressive, lost in their own thoughts a lot.Sometimes you'll hear a song you haven't heard in a long time playing in the distance.
YELLOW:
This void can make you feel happy even if you don't want to.Things that live here are more than likely neutral, but be on guard.Smells like citrus, which is nice, but gets overwhelming after a while.
GREEN:
An intense environment, creatures here might not be hostile but they are sometimes clingy.Smells like your favourite smell was dumped directly into your nose.
BLUE:
Very calm, makes you want to lie down and sleep. Do Not.The sound of waves or leaves blowing in the wind can be heard occasionally.creatures here are often passive, but best to be left alone.
PURPLE:
...Another intense environment, will make you want to give in to selfish desires.Creatures could be hostile or passive, best to keep your distance regardless.
WHITE:
True neutral space.Nothing can be harmed within, however, it's extremely easy to get lost here, don't stay for long.No sounds except the ones you make yourself.
BLACK:
The in-between to voids, huge and all-encompassing, do not get lost here.Must go through the black void to get to other voids, some journeys take longer than others.

There is also a large void called STATIC, made of static and sounds., makes your body tingle like you've been sitting down for too long. 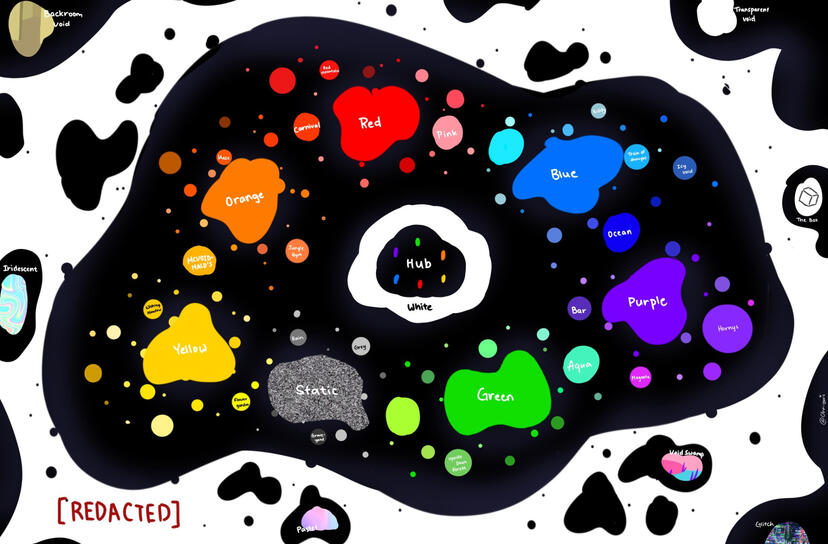 (note: not all voids present on map) (map by @chaiyerii)
Only the white void and the hub stay stationery.Sometimes the giant colour void blobs will merge with other blobs that have different voids and join together. Only the colour voids can do this.Smaller voids can pop up and collapse at random.

Void Colours are not the only voids, just the largest ones. There is an infinite amount of Voids, and there can be anything in any of them, the Void is chaos, and often doesn't make sense, so don't try and understand it too hard.

VOIDBIT was a twitter thread Andy and Pec begun, that turned into a comic, and now a whole universe.

Q: Are voidsonas and their subsequent creations the “only” thing living in the void? Or are there other entities that we have yet to see?
A: There are creatures the void has made itself with no outside influence.

Q: Do voidsonas have memories from before they were in the void at all?
A: If they have been in the void for a long time, their memory of the outside world will start to fade. Where they fell in and how the void corrupts them will affect this as well, but you can not spend too long in the void and keep your memories.

Q: Are there sub-voids? like voids within voids?
A: Some voids are larger and smaller than others, but void sections can not merge, they may overlap sometimes, but not for long before they move again.

Q: How do the inhabitants of the void travel between the different void colours? does it depend on the abilities of the person or is there another factor that allows them to travel? how does Andy travel?
A: Voids are separated by the Black Void, and sometimes will bump up against each other, so to get between voids you either walk through the Black void till you find another void, or look for voids that are right next to each other.

Q: Is there a name for voidsonas in-universe or are they just voidsonas?
A: Andy calls them "Creatures" but the sonas themselves may have different names for themselves/each other.

Q: does the “real world” know about the void or is it a completely unknown plane/dimension?
A: Some do! the Void is across all of time and space and all timelines, so someplace the void may be very well known, and some it might not be known at all.

Q: Can someone truly corrupted be cured?
A: Andy can decorrupt creatures that want to be decorrupted and send them home, however, the catch is that they may still have their memories from the void, and they might not even be sent back to the right timeline/time.

Q: Why does corruption occur?
A: The void is chaos and disorder, it is also outside the realm of time itself, mortal beings can not survive in an environment like that for long, so the void infects them to keep them... alive.

Q: How does Andy save people from corruption?
A: Andy is able to wash away corruption and teleport people out of the void with help of a force he called upon to help Pec originally, he doesn't know what it is, and the Void can't seem to hurt it/infect it. He cant call for it unless he's helping someone.

Q: How old is the void? How long has it existed? How long do inhabitants think it has existed?
A: The void was created by Andy by accident in his own timeline, but the moment it was created, it always existed, everywhere, everywhen. 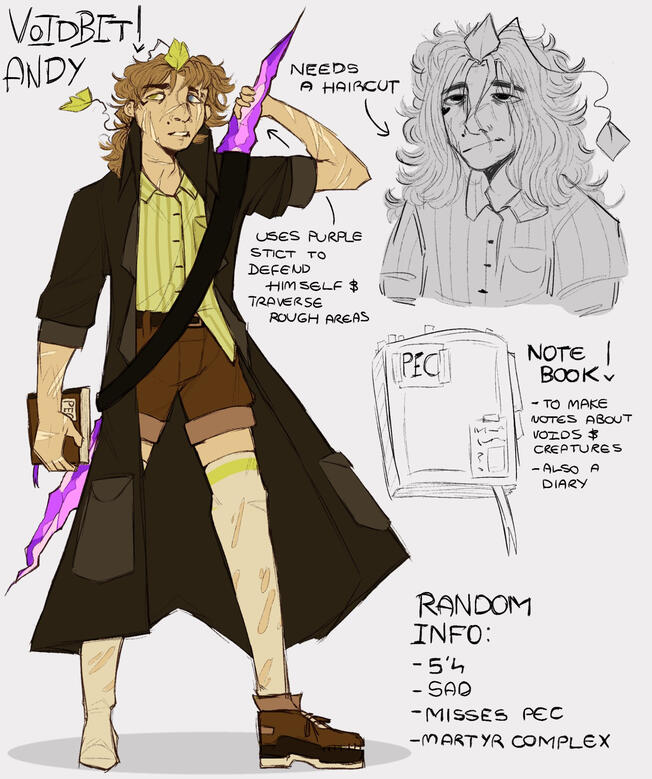 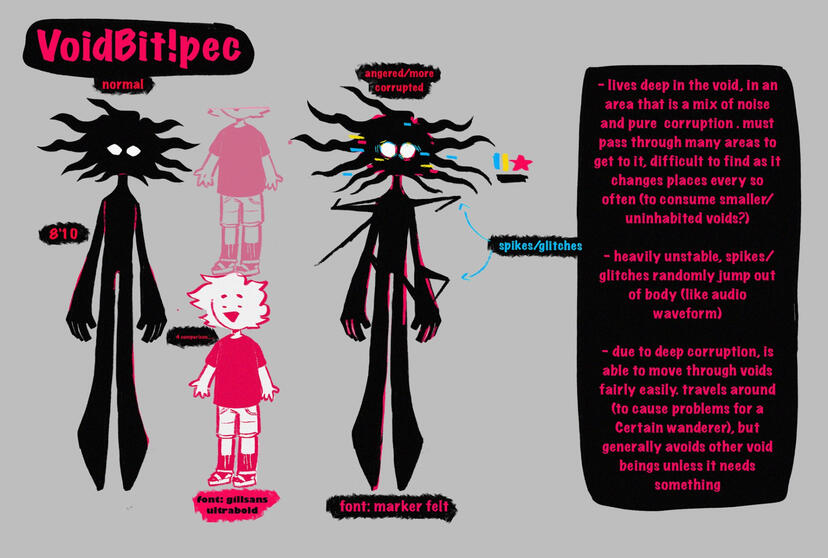